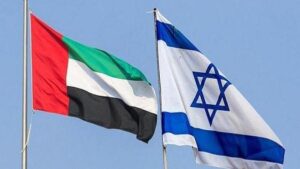 Brussels, August 17th, 2020 – The European Coalition for Israel welcomes the recent announcement of an upcoming historic peace agreement between Israel and the United Arab Emirates, which was made public in the White House on Thursday.

The diplomatic accord, only the third such agreement between Israel and an Arab state, points to a major paradigm shift in the Middle East, where normalization between former enemies is possible as they choose to leave the past behind and together look towards the future. The agreement comes after many years of covert business relations and intelligence cooperation between the two countries.

“Achieving lasting peace and stability in the Middle East requires a coordinated effort from the whole international community”, ECI Founding Director Tomas Sandell said on Monday. The current process of normalization between Israel and its former enemies should be fully supported by all stakeholders, including the European Union, in order to create a new peaceful, stable and prosperous Middle East.

The non-traditional approach of the US-Administration has surprised many, in that it has managed to clinch the first ever peace agreement between Israel and a Gulf State. By achieving this landmark deal, it signals that the more comprehensive proposal for peace between Israel and the Palestinians, the so-called ‘Deal of the Century’, is not dead but continues to inspire moderate Arab states in the region in finding a way out of the historic conflict. On Sunday, the President of Lebanon, Michel Aoun, acknowledged that he would also be open to discuss a peace agreement with Israel. Meanwhile Iran and Turkey have condemned the deal and called it a betrayal of the Palestinian cause.

Several European governments, as well as the EU Foreign Policy Chief Josep Borrell, have welcomed the peace agreement, hoping that it can restart direct negotiations between Israel and the Palestinians. Their statements, however, have reflected a less than enthusiastic acknowledgement of the US achievement, and have instead marked their relief that the agreement will postpone any Israeli plan on annexing Jewish communities in Judea and Samaria, a “no-go” for the European bloc.

Other analysts have been more positive. On Friday, New York Times columnist Thomas Friedman, a fierce Trump and Netanyahu critic, called the agreement a ”geo-political earthquake which would further isolate the radical pro-Iran and pro-Islamist camp, while empowering moderate Arab states and those who want to end the conflict with Israel once and for all”.

“It is now time for the European Union to also adapt to this major paradigm shift in the region and call upon the Palestinian side to immediately return to the negotiating table to seek a lasting peace with Israel”, Sandell concluded.