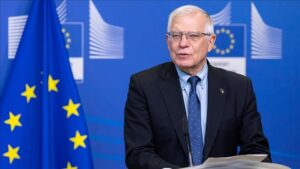 Brussels, 19th July, 2022 – The European Coalition for Israel welcomes the decision of the Council of the European Union to finally revive the EU-Israel Association Council after a pause of nearly ten years due to EU conditionality on progress in the Israeli-Palestinian peace process.

The EU-Israel Association Agreement was established in 1995 to ensure dialogue and strengthen relations between Israel and the EU-member states. However, over the last ten years the two sides have not met even once. The EU bloc has refused to convene any Association Council meetings due to their criticism of what they consider “lack of progress in the peace talks with the Palestinians”.

But inside the EU pressure from member states to reconvene the Association Council with Israel has been mounting for years. Still, several influential EU-member states, among them France, who held the EU-presidency for the first six months of 2022, have been reluctant to do so. But with the Czech government having taken over the EU-Presidency on July 1 and recent visits to Israel both by the President of the European Commission, Ursula von der Leyen and the President of the European Parliament Roberta Metsola, the tide has finally turned. On Monday the EU Foreign Minister unanimously voted for reviving the Association Council.

Still, after the meeting EU High Representative for Foreign Affairs, Josep Borrell assured the Brussels press corps that the EU remains concerned about the situation on the ground in the Palestinian territories and that the EU has not changed its position on the two-state solution but rather hopes that the renewed dialogue with Israel will enhance peace in the region.

In a short statement on Tuesday, ECI Founding Director Tomas Sandell congratulated the two parties on the diplomatic breakthrough. “With the current challenges facing the European continent and the international system as a whole, the EU needs to strengthen its strategic position in the world. There is no better partner for the EU and its citizens than the State of Israel. Renewing the Israel Association Council is therefore a win-win-win, which also includes the Palestinian side.”

With Israel preparing for its fourth parliamentary elections in the last five years, no date has yet been set for the next Association Council meeting.

To listen to the most recent European Report talk show where MEP Lukas Mandl and ECI’s Tomas Sandell discussed the need for a revived Israel Association Council, please click here.